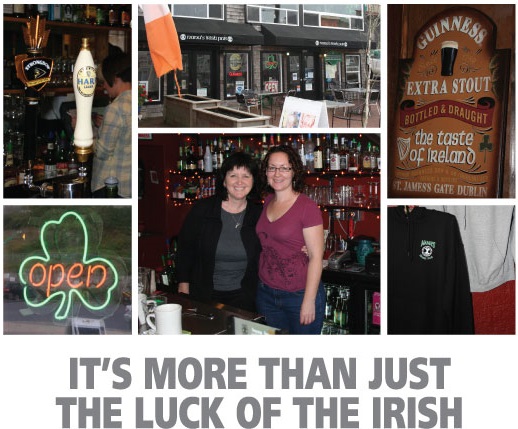 The experts call it a slow economy, yet Nana’s Irish Pub in the historic Nye Beach district of Newport has continued to grow at double digit rates. It’s not a matter of luck, one visit and you’ll soon understand the pub’s tremendous popularity.

Owned and operated by Philomena O’Brien and her daughter Tara Coughlan, Nana’s is as Irish as a pub can be. Philomena spent the first seven years of her life in Ireland and later returned for 10 years as an adult. After operating a successful restaurant in Virginia’s Shenandoah Valley for more than 10 years, Philomena moved to Portland to follow her three children, all who had relocated to Oregon and were working in the restaurant business. While visiting the Oregon coast for the first time, she examined an available restaurant space in Nye Beach and quickly fell in love with it. In September 2007 Philomena and Tara began remodeling, and by January 2008 they had opened the doors to their 960 square foot authentic Irish pub. An immediate hit with locals and visitors alike, Nana’s soon purchased the business next door and expanded into their current 2,300 square foot space.

Of course, any discussion of Nana’s Irish Pub eventually leads to the beers, which are all served in generous 20-ounce Imperial pints. Guinness Stout on tap remains the best seller, and locals proudly recommend the Rogue Brutal Bitter. Available by the bottle are an extensive selection of European imports as well as Northwest craft beers.

These days it’s hard to walk around Newport without seeing someone in Nana’s ubiquitous sweatshirts, tee shirts and hats, all featuring the Celtic tree of life and the pub’s motto, “Cead mile failte”, which in Gaelic means one hundred thousand welcomes.

Philomena calls Newport “the best place I’ve ever lived, even better than Ireland”. She also talks enthusiastically about her bank. “Local fishermen, neighboring businesses and many of my customers kept telling me I should be banking with Oregon Coast Bank, so I decided to give them a try. They’ve been great to work with and if we ever need to expand or remodel, I know the bank will stand behind us.”

It’s unique family businesses like Nana’s Irish Pub that make Newport so popular with visitors and such a great place to call home. Philomena and Tara have been a tremendous addition to our community and we’re honored to be their bankers.