Full disclosure – I’m writing this having just devoured one of Jeni Drescher’s freshly baked Morning Glory muffins (see photo above). Easily the best muffin I’ve ever had, healthy too.

It’s certainly not a lack of education that led Edd (yes, that’s a proper spelling – his parents were fans of the actor Edd Byrnes) and Jeni Drescher to work side by side, nine and a half hours a day, seven days a week, in a tiny building. Edd was an electrical engineer with an expertise in circuit board design. Jeni had a degree in education, a Masters in social work, and a successful career as a counselor and medical social worker.

About three years ago the Dreschers purchased a home on four acres south of Waldport. Edd commuted to Corvallis while Jeni drove to Coos Bay and the Eugene area to do hospice care. Living at the coast suited them. “From our front door we can be at the beach in ten minutes or lost in the woods in five,” explains Edd. But he was tiring of the corporate grind. Jeni was also contemplating a change. In her words, “hospice care makes you understand how important it is to do something you love while you’re still living.”

Jeni’s mom had taught her to bake and over the years she had studied the craft persistently to develop her own skills. Needless to say, she’d become quite good at it. Edd had developed a fascination with coffee. They both were ready to open a business of their own.

Their opportunity came in the Fall of 2014. A popular drive thru coffee stand became available in Seal Rock and the Dreschers purchased the business. By January, Seal Rock Espresso & Bakery was open to the public. The coffee was sourced by Pacifica, a Corvallis roaster with a considerable following. That’s Edd in the picture above at the controls of the Simonelli (the Ferrari of Italian Espresso machines) they purchased.

Open 5 am – 1 pm each day, Seal Rock Espresso & Bakery typically has a steady stream of customers at both of their drive-up windows. When there’s a line, the Dreschers are able to recognize their regulars’ vehicles and have their drink-of-choice prepared by the time they arrive at the window.

As a drive-up bakery, the company fills a special niche. Everything is baked fresh from scratch each morning including Danish, sweet croissants, strudels and bear claws. Hot croissant sandwiches, quiches, spanakopita, and English sausage rolls are popular for breakfast or lunch.

Working long hours side by side in a tiny space can be stressful for any couple, but the Dreschers are happier than ever, perhaps because of humor. “I’m a little boisterous and tell the same stories repeatedly,” laughs Edd. “I should have fired him five times over,” adds Jeni.

The company has an additional employee, who the Dreschers consider to be “like family”. “We’ve been trying to adopt her, but she’s 30 years old and her parents won’t let us,” jokes Edd.

About a year ago on the advice of other local businesses, the Dreschers transferred their business accounts to our Oregon Coast Bank Waldport office. “We wanted a bank that was involved in the community,” explains Jeni. Edd, who admits to “having an obsession with fifty cent pieces”, asked the bank if they could supply them to him each week to give to customers as change. “They loved the idea,” he says. “Now it’s fun to see fifty cent pieces recirculated all around town at other businesses.”

So after leaving the corporate world to become entrepreneurs, do the Dreschers have any regrets? “We’d do it again in a heartbeat,” says Jeni. “Owning a small business means not having to answer to anyone but ourselves.” Edd sums it up nicely: “We don’t get vacations, but we don’t have to go to meetings.” 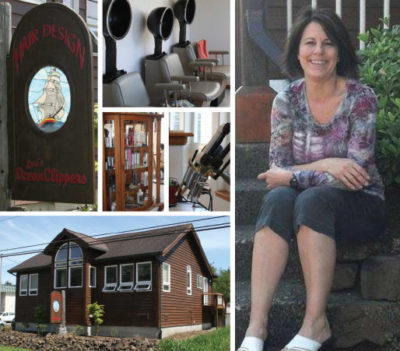 While a senior at Nestucca High School, Lori Whiteman asked herself some serious career questions.  “What will always be in… 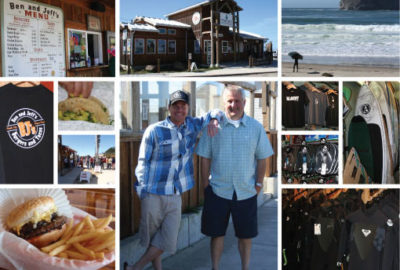 With a near constant line at their Pacific City restaurant’s takeout window and a thriving surf shop next door, it’s…