Gene Law bought his first fishing boat in Half Moon Bay, California during 1963. While he was rebuilding it he met Terri, who started visiting him at the dock. Eventually they married and later moved their family to Newport.

Matt Law, Gene and Terri’s first son, grew up helping on the family boat. But when it came time to choose an occupation, he decided on chemical engineering and earned a PhD. Jonny however, the Laws second son, couldn’t get enough of fishing. After a stint at college, he came home to captain a boat, and eventually partnered with his parents when the family purchased an additional vessel.

That’s the Ms. Law in the photo with Gene above. It was built in 1978 as a 60’ salmon trawler. In 1980 Gene retrofitted it to go after shrimp and crab from the Californian border to the Canadian border, which it still does today.

The photo in the oval inset is of the Lady Law, which has quite a history. It was 107’ when Gene, Terri and Jonny purchased it in Galveston, Texas during 2005. That was the year of Hurricanes Katrina and Rita, which each brought catastrophic damage to the Gulf Coast. As Gene puts it: “anything that could go wrong, went wrong.” It would take seven months to cut it down to 83’ and refit the Lady Law for crab, sardines and shrimp. Finally, the job was completed and Jonny took the helm for the 34-day trip from Galveston, through the Panama Canal, to Newport.

These days, Jonny works long hours captaining the Lady Law. Terri and Jonny‘s wife, Michelle, do the books for both vessels and manage the company’s ten employees. Although still very active in the businesses, Gene no longer fishes. “I spent 50 years on the ocean,” he says. “I know what it looks like.”

Throughout his commercial fishing career, Gene has tried to give back to the industry. For 17 years he volunteered on the Pacific Management Commission Coastal Pelagic Species Committee. He also served 15 years on the Dungeness Crab Commission. Recognizing the lack of local resources to fix nets, Gene and Terri opened Olalla Net Works in the early 1980s, a company they operated for more than a decade, employing 35 people.

Although dangerous as an occupation, commercial fishing has an unmistakable appeal. “You see things most people will never see,” explains Gene. “Like whales, porpoises and amazing sunrises. I caught a 50’ sailboat once, but that’s another story.” Gene also has an appreciation for the friendships he’s made in the industry. “From Mexico to Canada, you meet a lot of great people in this business.”

Gene’s relationship with Fred Postlewait, Chief Executive Officer of Oregon Coast Bank, goes back decades. “It was Fred wiring us money that kept us going when we were retrofitting the Lady Law during the hurricanes,” explains Gene. “He also wired us the money so that we could sail it to Newport. Truth is, fishing can be an ongoing money pit. Oregon Coast Bank has always stood behind us with the financing we need.” 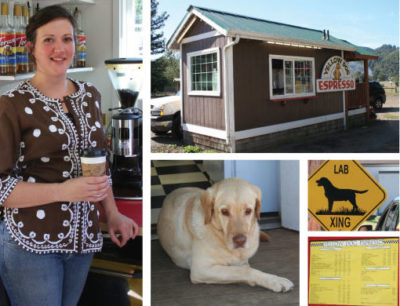 Drive into Hebo and you’ll usually find a line at both windows of Yellow Dog Espresso. The business, which will…

It may house one of the most impressive displays of wildlife trophies in the northwest, but L&L Equipment in…