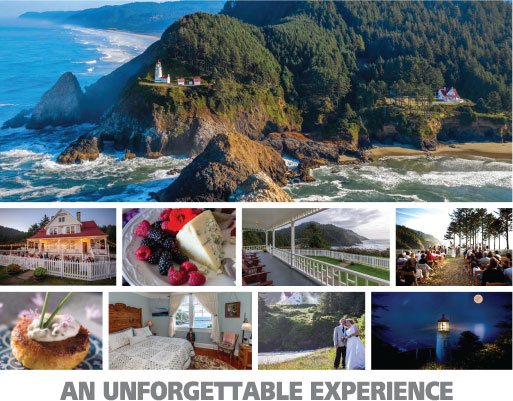 Halfway between Yachats and Florence, more than 200 feet above the ocean, the historic Heceta Head Light shines a beam visible for 21 nautical miles, the brightest light on the Oregon coast. Widely considered a national treasure, it has been called the most photographed lighthouse in the United States.

When it was built in 1894, the Heceta Head Lightstation complex included two Queen Anne-style houses for lightkeepers. Today, one of those homes remains, repurposed as a unique bed & breakfast and interpretive center.

It was 1995 when the U.S. Forest Service chose Mike and Carol Korgan, both certified executive chefs, as the first innkeepers for the Heceta Lighthouse Bed & Breakfast. As volunteers, the Korgans helped start the careful restoration of the interior. Three years later, their daughter Michelle joined the B&B’s management team. In 2003 she purchased the business from her parents.

Perched on a cliff with a breathtaking ocean view, the Keeper’s House is lodging like no other. A handcrafted wooden staircase leads to well-appointed guest rooms with unique antique furnishings. Guests return year after year, mingling by the fireplaces, by the piano in the dining room, or simply contemplating the crashing surf below from the large wrap-around porch.

Each day begins with the Keeper’s Houses famous seven course breakfast including artisan cheeses, local sausages, and produce picked fresh from the Lightstation garden. Guests are taught the history of the house and encouraged to take a nighttime stroll to the light tower, just like the lightkeepers of old. The spectacle of the light beams cast by the Fresnel lens as they circle through the stars above your head is an unforgettable experience.

Needless to say, any structure perched on Heceta Head would require constant care, especially a brightly painted Victorian that is 126 years old. While a percentage of the lease that Michelle pays to the U.S. Forest Service is earmarked towards maintenance of the Keeper’s House, much of the ongoing restoration is supported by KHHL (Keepers of Heceta Head Lightstation), a non-profit that through volunteerism and financial contributions has been instrumental in preserving and providing public access to the Heceta Head Lightstation.

Yet it wasn’t the relentless pounding of the elements that posed the latest challenge to Heceta Lighthouse Bed & Breakfast. It was the pandemic and the resultant restrictions on the hospitality industry mandated by the state. Eventually, bookings for guest rooms did return, but special event revenue was severely affected. Weddings, for example, had to be smaller or postponed.

To help bridge the pandemic revenue gap, while keeping her staff employed, Michelle was able to qualify for the latest wave of federal PPP (Paycheck Protection Program) loans through Oregon Coast Bank. She credits Linda Eriksen, who manages our Oregon Coast Bank Waldport office, for simplifying the PPP process and helping her qualify for loan forgiveness. “Oregon Coast Bank also provided financing for our capital improvements,” explains Michelle. “Linda cares a ton – I guess that’s the best way to put it.”

Now that business is returning to pre-pandemic levels, Michelle has plans to develop a public food concession in the historic sheds on the Heceta Head Lightstation property. She’s also looking to reprint her Heceta Lighthouse Breakfast Cookbook, which sold out its initial printing of 6000 copies. In the meantime, if you want to enjoy that amazing seven course breakfast, book yourself a room at Heceta Lighthouse Bed & Breakfast. As the lightkeepers of old could tell you, you can’t beat the view. 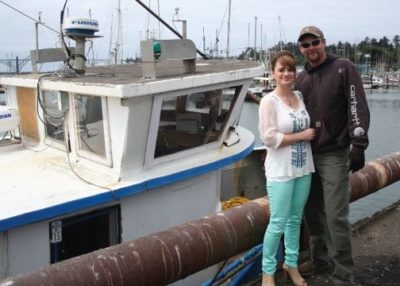