For 42 years now, Curl School Bus Service has provided busing for the Vernonia School District. It’s a commitment to the community that Rob Curl has always taken very seriously. In 2020, that commitment required overcoming a whole new set of obstacles.

It was Rob’s dad and grandfather who first bid on and won the contract to provide school bus services in Vernonia in 1978. As he grew up, Rob often helped out in the Curl School Bus Service shop and would then hike for an hour over the mountains to have lunch at his grandparent’s timber and cattle farm. Those are fond memories.

After graduating from Oregon State University with a degree in forestry and natural resources, Rob spent more than five years traveling throughout the west doing environmental assessments on rivers. In 2005, he returned to the family business, eventually purchasing it after his dad became ill.

With 16 employees operating 19 buses and vans, Curl School Bus Service is one of only three small local busing companies servicing school districts in the state of Oregon. The rest are large corporations. “All of our employees are local folks vested in our Vernonia history, people committed to doing a good job for the community,” explains Rob. “Everyone knows everyone around here, which makes it even more important that we make the community proud.”

If you were to drive across the Vernonia school district, it would take almost an hour. That means it can be raining in town, clear in other areas, while other parts of the district are under six inches of snow. When adverse weather hits, Rob must make the difficult decision about whether schools can be open. “We know that deciding whether buses can run safely affects everyone in the community,” says Rob. “You never fall asleep on nights when snow is coming.”

Snow falls every year; fortunately, pandemics are a much rarer occurrence. Covid has altered all our lives. Businesses in particular have faced considerable challenges. Even though in-person learning is suspended, Curl School Bus Service has still been providing the essential service of delivering school lunches throughout the district. To do so, Rob had to purchase three smaller buses, so that lunches could be delivered up individual driveways.

To deliver those lunches hygienically and to be prepared for the eventual resumption of transporting students, Rob had to assess all of his company’s sanitation protocols. “While most busing companies are simply hand wiping common surfaces, we wanted our employees and the community to feel safe, so we invested in the highest level of sanitation in the industry,” he explains. At a cost of more than $10,000, Rob purchased professional sprayers for every bus in the fleet, so that each bus could be disinfected on the fly, meaning less delays and no cross contamination. In Rob’s words: “We’ve done it the right way because that’s what our community deserves.”

But for Rob and his wife, Sara, 2020 hasn’t been all negative. Their first child, Weston, was born in June. An ER nurse for 18 years, Sara is finishing a 6-month maternity leave and will return to nursing in January. In their spare time, Rob and Sara work on the 150-acre timber property that they purchased from the family trust, managing the same land on the Nehalem River that Rob has so many fond memories of when it was owned by his grandparents.

Like most folks in Vernonia, Rob is an avid hunter and fisherman. In fact, it was through hunting and fishing that he forged a friendship with Jake Postlewait, a Senior Vice President at Oregon Coast Bank, back while they were both attending Oregon State.
When Covid began shutting down commerce, and businesses across the country were scrambling to remain financially solvent, congress did the right thing and acted to provide the SBA Paycheck Protection Program. But applying for PPP loans entailed considerable paperwork and the requirements were at first somewhat of a moving target.

“We applied through our former bank and to put it lightly I was somewhat panicked when I learned that every PPP loan that bank had prepared had been rejected during the first round of financing. That’s when I called Jake. He said Oregon Coast Bank would be glad to help and within one day they submitted our application and our loan was approved,” remembers Rob. “We were so impressed that we decided to move all of our accounts to Oregon Coast Bank, which has been a great decision. Their service is amazing.”

For most businesses, the pandemic and economic shutdowns have been difficult. “We were financially healthy going into it and by hunkering down we’re getting through it,” points out Rob. “We’re able to make our bus payments, so I guess we’re one of the fortunate companies, but I feel so bad for the family businesses who haven’t fared as well. People here in Vernonia are resilient. We’ve rebuilt before. As a community we will get through this. I count our blessings every day and look forward to continuing to serve our role in the community for years to come.” 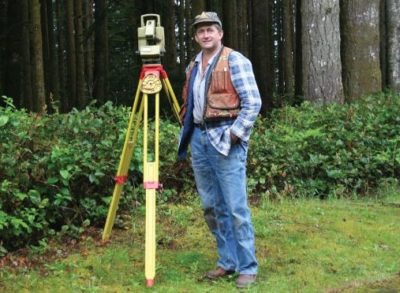 Aside from his years studying forest engineering at Oregon State University, Gary Nyhus has lived his entire life in Tidewater….