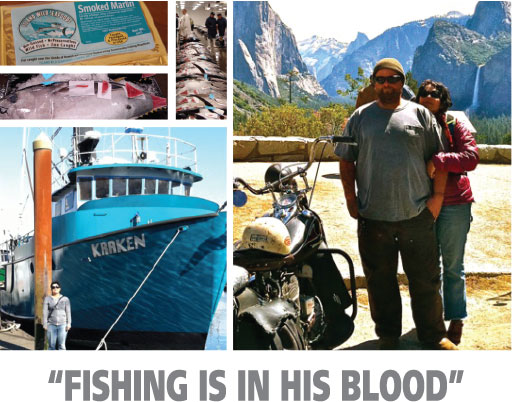 Born and raised in Newport, Clint Funderburg first began working on fishing charters at the age of 14.  By the time he was 18, Clint and his best friend Clay Archambault had purchased their first vessel, the Judy II.

As his fishing career evolved, Clint a friend built the 110 foot Rachel and purchased the 100 foot Golden Sable.  About a year and a half ago, Clint and his life/business partner Karen Edwards decided to downsize to a high capacity vessel that would be more fuel efficient and purchased the 65 foot Kraken.

The Kraken fishes predominantly by long line under limited entry permits in Hawaii and the islands of American Samoa.  Each fish caught is immediately cleaned and bled, then taken into a processing area to be filleted and vacuum packed.

Fish caught and processed by the Kraken include ahi tuna, ono, hebi, opah, monchong, swordfish, mahi mahi and escolar.  Fresh fish caught in Hawaiian waters are generally sold immediately at auction.  The catch is quickly unloaded, weighed, given core samples to determine freshness, and displayed on ice where distributors, restaurateurs and even individuals may bid thousands of dollars on a single fish.  Prices vary widely depending on the number of buyers and how many boats are bringing fish to the auction.

Several years ago, in an effort to bring more stability to the pricing they receive for their fish, Karen and Clint formed an independent company, Island Wild Seafoods.  The company distributes vacuum packed fillets, smoked seafood, and canned fish to restaurants, grocery stores, farmers markets and through internet sales.  “Sadly, about 80% of the fish eaten in America is foreign-caught,” explains Karen.  “We’re giving consumers a chance to buy local – they know who caught their fish as well as how it was processed and cared for.”

Originally a pastry chef by trade, Karen’s intimate knowledge of the restaurant industry has helped Island Wild Seafoods become highly in demand.  About every other month she travels to Hawaii to take care of paperwork and help with the logistics of the company’s Hawaiian operation.

Clint’s passion for his job is obvious – “fishing is in his blood,” explains Karen.  In fact, when he has time off, he’ll generally fish local rivers for steelhead or trout and call it fun.  In their spare time, the couple is building a new home on 13 acres on the Yaquina River.

Longlining on the Kraken is a five-man operation.  Depending on the demand, the vessel also fishes locally for albacore, hiring a Newport-based crew.  Processing Island Wild Seafoods products sometimes requires additional local labor.

Clint and Karen have been banking locally with Oregon Coast Bank for more than eight years.  “We liked that they were so involved with the fishing community,” explains Karen.  “They loaned us the money to start Island Wild Seafoods, they finance our vehicles and they help us with our foreign transactions.”  Karen also appreciates Oregon Coast Bank’s online banking.  “I can manage our accounts and pay bills using my phone or laptop.  That means we can run our businesses from virtually anywhere.”

Through continual innovation, Clint and Karen have created highly successful, environmentally responsible companies.  The fishing industry remains one of the backbones of our coastal economy and hard working family businesses like the Kraken and Island Wild Seafoods are essential to its success.

Paul Schones’ grandfather is a fisherman, so is his dad, in fact Schones family members have fished commercially in the…