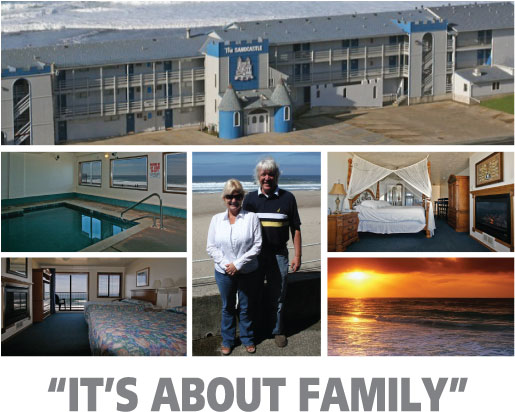 Back in the early 80s, Gary and Alberta Ellingson were raising their family and managing apartments in the Portland area. But Gary also worked as a contractor and often his building projects would keep him away from home. Because one of their children had special needs requiring additional attention, they began searching for a business that they could operate as a family without having to travel.

While working a construction job on the Salishan spit, Gary found a small 15 unit Lincoln City motel for sale with enough land for expansion. The sellers agreed to take payments, so in October 1985 the Ellingsons became the proud owners of the Sandcastle Beachfront Motel. “At the time, we knew virtually nothing about the motel business,” remembers Gary. “Running the business entirely by ourselves, we soon realized we were on 24 hour call… but we loved it,” adds Alberta.

Doing much of the work themselves, Gary and Alberta expanded the facilities and added amenities like a large indoor pool and Jacuzzi. These days, the Sandcastle includes 39 motel units and an additional 11 apartments across the street. As the business grew, so did the staff. Today, the Sandcastle employs 14 and most of the employees have been with the company for many years. Adding to the family atmosphere, several staff members live in the apartments on the property. “When he first came to the Sandcastle 17 years ago, our manager had a newborn,” recalls Alberta. “Now that baby is grown and knows how to run the motel.”

Many of the Sandcastle’s customers have been coming to the motel for more than 40 years, and it’s not uncommon for second and third generations to visit. Family reunions at the Sandcastle are a frequent occurrence. “We have one customer who’s been here almost 20 years,” laughs Gary. “He was staying in one of our motel rooms when the weather got rough, so we moved him across the street to one of our apartments. Apparently he liked it and we’ve enjoyed his company ever since.”

What makes the Sandcastle so popular? All of the units are literally right on the beach; look out the window and you’ll see uninterrupted sand and surf. Knowing that customers have varied needs, the Ellingsons have built accommodations in a wide variety of styles ranging from standard rooms to full efficiency units. The Sandcastle even offers romantic suites, which include oceanfront Jacuzzis. Gary and Alberta have also been careful to maintain an affordable price structure, and based on the Sandcastle’s high occupancy rates, their customers seem to approve.

The Ellingsons are very appreciative of their beautiful surroundings. “Every day we get to walk on this beautiful, relatively secluded beach,” comments Gary. “It really spoils you.” They also try to be good ambassadors for Lincoln City, which is why Gary serves as a city councilor.

About five years ago, Alberta noted a particularly attractive CD rate in the newspaper and visited Oregon Coast Bank’s Lincoln City office for the first time. She was immediately impressed by the helpfulness of the staff, and soon she and Gary had moved all of their business and personal accounts to the bank. These days they also take advantage of Oregon Coast Bank’s merchant services, knowing that competitive credit card processing rates are highly important in the lodging industry. “Oregon Coast Bank has just the nicest people,” adds Alberta.

Of course the minute you meet Gary and Alberta you’ll understand that the word “nice” is even more appropriate in describing them. It’s also nice to see such good people succeeding in business for the right reasons. 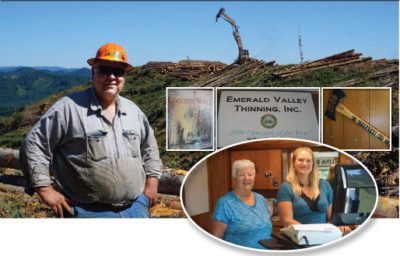 Born and raised in Eddyville, Tracy Smouse has been part of the timber industry for most of his life. Tracy’s…