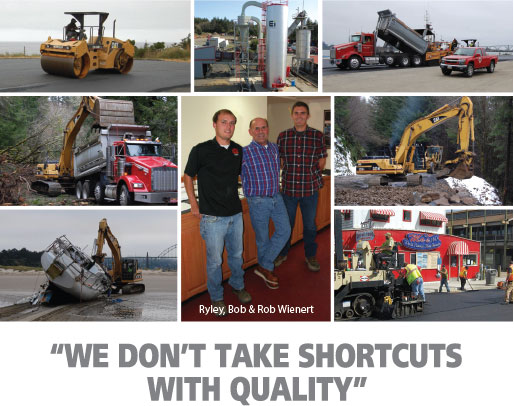 For over a half a century Road & Driveway Company has paved and maintained the roads of the central Oregon Coast from Florence to Tillamook.  The company, headquartered in Newport, now operates three major quarries, two asphalt plants and in peak times employs more than 50.  Despite its size, Road & Driveway remains a family owned business.

Raised in Toledo, Bob Wienert started working part time in his father’s businesses at the age of 14.  After graduating with a degree from Western Oregon College of Education, Bob was asked by his dad to come home and help run the family businesses.  More than 40 years later, he’s still at the helm.

Although Bob calls the 30 plus hours a week he continues to work as “semi-retirement”, he’s turned over the day-to-day management of the company to his sons Rob and Ryley.  Like their dad, Rob and Ryley each started working at the company while attending high school.  Both are graduates of Oregon State University – Rob’s degree is in Business Administration, Ryley’s is in Construction Engineering Management.  A third brother, Rogan, is currently attending OSU and also intends to join the family management team after graduation.

With people using them every day, each road and driveway the company paves is in a sense their best form of advertising.  “We don’t take shortcuts with quality,” explains Rob.  That’s possible because Road & Driveway Company is able to control the product from start to finish – from mining the rock, to creating asphalt mix, to applying it.

In times of emergency, the community often depends on Road & Driveway Company.  “If there’s a land slide or beached vessel, we’re there even if it’s in the middle of the night,” explains Ryley.  In fact, it’s understanding coastal weather conditions and the resulting effect on road construction that has made Road & Driveway Company so successful.  The company is also highly invested in technology and is the only paver on the coast that owns a state-certified asphalt lab.

It may sound unusual to think of quarries and asphalt plants as “green” businesses, but Road & Driveway Company is a leader in environmental protection.  The company has been awarded the state environmental award for asphalt plants on three separate occasions.  “Asphalt is 100% recyclable,” points out Rob.  “A significant percentage of all our mixes include recycled product.”

“I wouldn’t make a very good employee,” laughs Bob, but for many years Road & Driveway Company has been one of our area’s best employers.  With benefits including medical insurance, 401K contributions, bonuses, and annual raises, Road & Driveway Company’s employees average more than 20 years with the company.

Desiring to keep their deposits working locally, Road & Driveway Company became an Oregon Coast Bank customer more than five years ago.  The Wienerts appreciate being able to talk directly with Oregon Coast Bank’s management team.  As bankers, we appreciate Road & Driveway’s 50 plus years of service to the community and their reputation for quality work.  In fact, recently we had them re-pave the parking lots at our Newport office.

The Wienerts laugh about it saying, “for the most part we get along,” but transitioning the management of a family owned company from generation to generation can be a difficult process.  Starting with the company as laborers, then gaining an outside perspective through their college years, the Wienerts take nothing for granted.  Over the years, Road & Driveway Company has grown significantly and acquired other companies, but it remains a family business – a company deeply rooted and supportive of our local community. 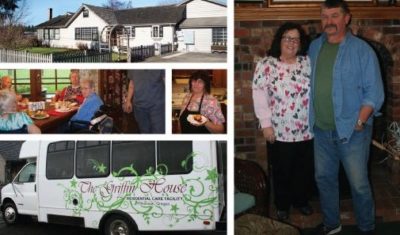 l admit it, I sniffed. But when I walked into the Griffin House in Tillamook, it didn’t smell like a… 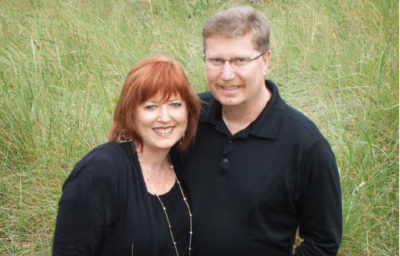 Born, raised in, and still a resident of Toledo, Colin Park always wanted to be a photographer.  After graduating from…